Hotay arrived at Zebs Wish in 2013 after 12 years of living, tied by a noose to a truck axle in the forest in the coastal mountains of Oregon. Forced to drag the axle around as he searched for food and water, Hotay was thin, sick and had terrible feet.  A kind neighbor finally convinced the owner to let Hotay go.  The winter night that we finally cut Hotay from his noose opened his life up for the first time.  Hotay learned that humans were not all to be feared, touch was wonderful, and life could be a bright place!

We are thankful to our fearless transport volunteers for braving the cold and dark and TERRIFIED donkey to get him out of there on that cold night. What a joy to have him arrive and settle for the first time in a soft warm stall!

Donkey Hotay was adopted in 2016 by his loving momma and now spends his days with his herd of Donkey and Mule pals. 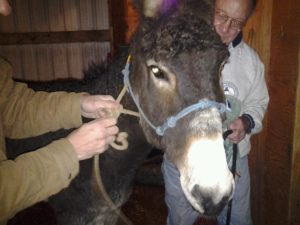